The Beat Generation and how they influenced my art.

The Beat Generation were a group of queer Artists who helped forge a road free of censorship while encouraging the expression of the self throughout the 50s to late 60s. Known by its great influencers such as Allen Ginsberg, Jack Kerouac and William Burroughs, the Beat Generation made a great mark in history for literature and creatives looking for something fresh and far away from the traditional American values at the time. The movement sparked controversy, with their work often detailing experiences with drugs or sexual experiences of both heterosexual and homosexual nature, which was shocking to the public at the time. Censorship was an issue they often tackled, as Ginsberg's 'Howl' was taken to court to avoid further publishing however the case was won under the Judge ruling the poem was of "redeeming social importance". It is a good time to discuss the Beat Generation, who were vocal about their disdain towards 'Traditional American values' [1] which couldn't be more fitting for the current political climate currently raging in America. This movement had a great impact on my personal development as an artist. As a bisexual woman looking towards the past at this movement, its values and inspiration really helped me to identify much more on an intimate level with my work. In this blog post, as much as I would love to get into the movement in its entirety, I will be discussing the basics of this movement; the core values, inspirations and Artists of note, and how they influenced my work and made me into the artist I am today.

The inspirations of the Beat Generation

The Beat Writers (Ginsberg, Kerouac and Burroughs) considered the generation of writers before them as the 'Lost Generation' and although they hated the work before them they did take inspiration from the most radical segments of the Lost Generation, mostly from the notorious 'Henry Miller's "Tropic of Cancer", which was banned due to its frank sexuality' [2] but also from William Butler Yeats' "A Vision" which was written through a process called automatic writing, where he put pen to paper, receiving messages from the spiritual world 'without thought or editing' [2] . This writing method attracted Lucien Carr, a mutual friend of The Beat writers and was a great influence to their writing style. They wrote with 'first thought, best thought' in mind and limited their editing, this method of creation felt freeing to the writers as it felt free of constraints. They called their new found ideology the 'New Vision' and it was the core to their artistic style and the movement they created. They were inspired by life and living, often getting drunk and high and found inspiration from living this way, without restraints.

I found the inspirations important for inspiring my artwork, learning to be less rigid and more fluid with my work made drastic changes in my approach to art. I became more experimentative to my approach and saw the importance of including themes and narratives within my work. I wanted my work to say something and mean something, I wanted it to hold more value than just being pretty.

The ideology behind the 'New Vision'

The new ideology forged by the original Beat writers had three major tenets to it which helped define their work and their artistic process:

All of these tenets I use each time with my process of creating and developing my ideas further. It really helped me to step into a new direction with my work and what I want to say with my work, like with my 2017 series of paintings looking into the political climate of America at the time.

I decided to go for political themes and speak a narrative critiquing Trump. Inspired by the movement I tried tackling a current issue that was important to me and my beliefs. I kept my message and themes clear and uncensored. My trilogy of work surrounding Trump critique his view of women, relations with other countries and depicting his dark intentions. But the piece I wanted to focus on most today is the first one, 'Grab them by the Pussy' . This is a water colour piece involving a lot of symbolism. Taking inspiration from his many misogynistic views of women, I decided to attempt a depiction of the objectification of women by Trump. The first symbolic gesture of this is the bar code inspired background, looking into the idea of women being a commodity to purchase. Moving on, I used colour to emphasise the idea of women being warm and desirable and the cold unwanted touch of a man. The blue tones I used to suggest the need for warmth and the pose of the hand to represent desperation. I like this piece best out of the three paintings I produced as it is not as obviously political but still holds a lot of emotional weight for me with the symbolism I incorporated. I feel it is relatable to women who have also experienced sexist, aggressive behaviour directed at them from unwanted men.

The defining Artists of the Beat Generation

To finish with I want to put a spotlight on some of my favourite Queer Artists from the Beat Generation and hopefully you'll be able to find some inspiration there too. I think they really helped to define creativity and queer identity with the art world in a time that wasn't so accepting towards queer people. Writers such as William Burroughs and Allen Ginsberg were able to reach people with their words while also being known homosexuals in the 50s to 60s, which is an amazing accomplishment. So without further ado, here are some awesome Artists from the Beat Generation movement I think you should totally check out, learn from and be inspired by.

Allen Ginsberg a poet from the Beat Generation and one of the original creators of the movement. His work was one of the first I came face to face with and I loved it so deeply. I highly recommend 'Howl, Kaddish and other poems' which features so much open, honest and queer based poetry which was so inspiring to read and learn from. If you're new to the movement and writings of the Beat writers I totally recommend starting with Allen Ginsberg's 'Howl' and Jack Kerouac's 'On the road' as those are the classics and provide a good introduction to the writing style associated with the movement and the time.

I was introduced to the mind of William Burroughs through his work 'Naked lunch' and boy is it a trip. He was a queer American Novelist and painter and was a primary figure to the Beat Generation. Burroughs was the man behind the idea of expanding the mind through the derangement of the sense's and this is clear to see in his novels and novellas exploring the lucidity of drug use. If you want to find inspiration through some weird and strange writings, William Burroughs is the way to go.

Elaine de Kooning was a pioneer of Abstract Expressionism. Her work fits into the loose expressive work of the Beat Artists and you can see the strong influence of jazz present at the time in her work. I love her unique take of portraiture and her approach to making marks within her style. Her approach is refreshing to see compared to traditional portraiture, stripping away at traditionalism to apply the newfound language of modernism becoming increasingly present in the art world at the time. If you want to see a bold and striking approach to portraiture and oil paint I highly recommend giving de Koonings work a good look. 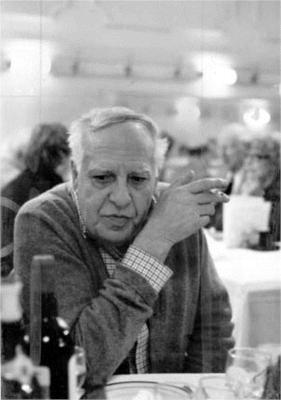 Philip Guston was also present in the Abstract Expressionism movement alongside Elaine de Kooning and her husband Willem de Kooning. Although his style and subject matter does not appeal to me in terms of what I would like to produce as an Artist there is value in observing his approach and influences. The bold colours present in the Beat Artists' work is something I took influence from and applied within my own work and I love how it turned out, especially in my Political series of paintings. You can see Guston works mostly with a monochromatic, pink, red and brown colour palette which works well and has become his signature look. If abstrcat expressionism is of interest to you, I urge you to look into Guston and the work by the de Kooning couple.

I believe its vital to take inspiration from creative work outside of just painters and traditional Artists but to also look to the words of writers as inspiration as well. Looking to the past at Artists and Creatives who have helped define and paved the path for queer expression and honest expression is so crucial to observe and learn from. I am so happy I discovered the Beat Generation when I did at 15, as they helped me to be comfortable in my identity and helped me to embrace being a bold artist. They helped me to find my voice as an Artist and look at the world around me to find what I needed to say within my work. I hope you are able to find that inspiration too, and I urge you to look and discover more about this movement if it interests you.

For more of my Artwork you can find me on Instagram: @mona.hopewell.art

Damian Massey: Artist of the Week